×
Go to content
Douai Abbey: The Monastery of St Edmund, King & Martyr
Published by HSK in News · 1 July 2019
» On 24 June the Abbot President's Regimen met at Douai.
» The next day Fr Abbot was at our parish of Studley in Warwickshire to administer the sacrament of Confirmation on 21 candidates prepared by the parish priest, Fr Benedict.
» On 27 June Fr Abbot received the solemn vows of Sr Marian Sweeting-Hempsall at Stanbrook Abbey in Yorkshire. Ad multos annos!
» Professor Alison Shell of University College, London, visited the Douai library to inspect some medieval manuscripts as part of her research.
» The Douai Society held its AGM on Saturday, 29 June, at Douai, after a Mass celebrated by the Society's chaplain, Fr Boniface. The climax of the AGM was the launch of a handsome magazine produced by Richard Sims for the Douai Society to mark its 150th anniversary of foundation. Accompanying the magazine is a DVD entitled The Douai Story, a short film produced by Old Dowegian Jonathan Kight in 2017 to mark the opening of the Douai Room in the refurbished cricket pavilion in Douai Park. The same afternoon a Douai Society XI took up willow and leather on Douai Park against a touring XI from Melbourne Grammar School. The result was, by all reports, sufficient for the honour of both teams. 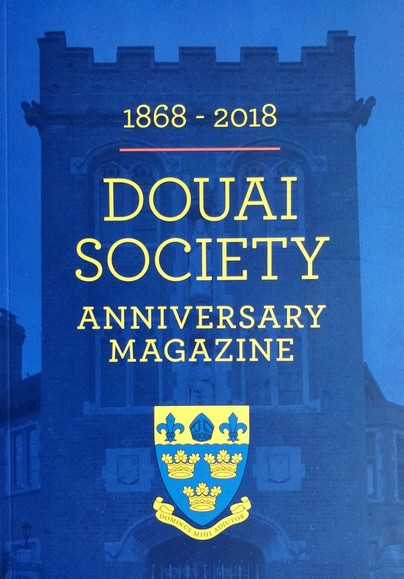 » The same evening the first concert was held in the abbey church since December. The repairs to the abbey church have largely been completed and only a few portions of the scaffolding remain to be removed.