×
Go to content
Douai Abbey: The Monastery of St Edmund, King & Martyr
Published by HSK in News · 8 October 2019
» On 30 September Tom Messenger of Basingstoke took up residence in the monastery to begin his postulancy. Please keep him in your prayers. Arriving the same day was a full house of 34 clergy for the Portsmouth diocese clergy retreat who were in company with Bishop Philip. The retreat was led by Abbot Xavier Perrin of Quarr Abbey on the Isle of Wight.
» The next day Abbot Geoffrey flew to Edinburgh to represent the EBC at the final hearing of the Scottish Child Abuse Inquiry relating to Fort Augustus Abbey (which closed in 1999). He has made a number of trips to attend the hearings.
» On 2 October our early 13th century reliquary was put on display in the Sacred Silver Gallery, Room 84 of the Victoria and Albert Museum following conservation work. The reliquary may have been commissioned by the abbey of Bury St Edmunds. The crowns on a red and blue field recall the abbey’s arms and those of its patron saint, King Edmund. It is a rare example of a medieval reliquary that managed to escape destruction during Henry VIII’s suppression of the English monasteries in the 1520s and ’30s. It was made either in France or England, in the period 1300-1325. In the photo below, it is on the very left. 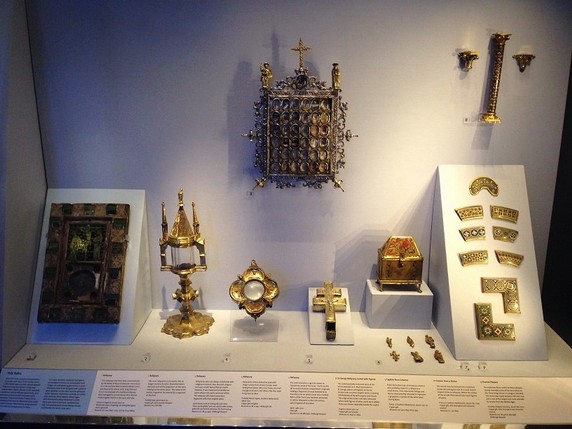 » Our choir numbers swelled a little on 5 October with the arrival of Br Andrew Prickett of Buckfast Abbey and Br John George of Downside Abbey. They will be live at Douai whilst studying theology at Blackfriars in Oxford. Fr Giles Conacher of Pluscarden Abbey  arrived the same day from Lourdes to stay overnight before heading back to Scotland.