Published in News · 12 April 2022
» The return of the webmaster from overseas allows the resumption of regular updates here. Some more pressing items were posted on Twitter, and our Twitter feed appears on the homepage. Please always check it in case there is an update there.
» News from the abbot:
On 16 March Abbot Geoffrey was the principal ceebrant at the funeral at Belmont Abbey (picture below) of Sr Catherine Wybourne OSB, formerly of Stanbrook and lately of Howton Grove. She had battled cancer with success for many years. She will be much missed by many. 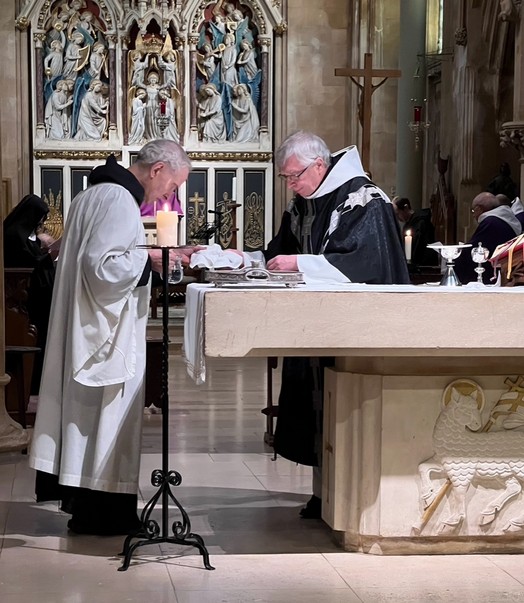 » On 28 March the abbot celebrated the last Mass of term at Winchester College, and the next day attended the Oulton Trust meeting in person, not via Zoom, for a change. After this he took a few days of holiday.
» Desmond Seward died suddenly on 6 April. He was a parishioner, Old Amplefordian, Knght of Malta, and prolific author. His funeral will be at Douai Abbey at 11.30 on 27 April.
» Returned from his short break, Fr Abbot attended the ceremony at Reading Crown Court on 8 April to mark the end of Willie Hartley-Russell’s term as high sheriff, which was followed by lunch in Reading Town Hall.
» As a sign of our gradual moving beyond Covid, the Palm Sunday procession was revived this year, beginning this year in the library cloister.