×
Go to content
Douai Abbey: The Monastery of St Edmund, King & Martyr
Published by HSK in News · 3 February 2019
» As with much of England, Douai has been hit by the recent winter blast of snow and ice. We pray that everyone is travelling safely, be it on foot or by car. 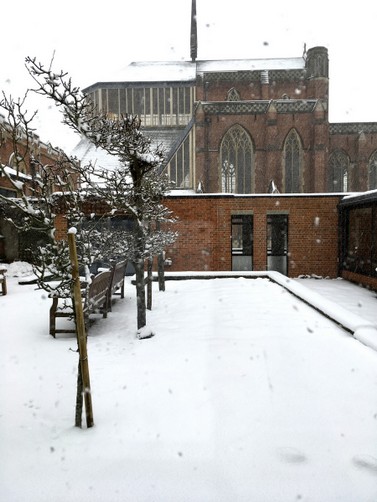 » The snow did not hinder 60 confirmandi from Eton College spending that day with us on 1 February.
» On 27 January Fr Abbot attended the launch in Cheltenham of the book, The Indomitable Mr Cotham: Missioner, Convict Chaplain and Monk, by Joanna Vials. Fr Ambrose Cotham was a Douai monk who was a pioneer priest in Tasmania before returning to England to consolidate the former Douai mission at Cheltenham. Fr Abbot wrote the foreword to the book.

» On the same day Woolhampton parish held a party in the monastery's guest refectory. Over 80 people attended making for a lively occasion.
» In the days following Fr Finbar visited Quarr, Fr Alban attended a novice masters' meeting and, on 31 January, the community held a ferculum to mark the feast of St Alban Roe, a martyr monk of our community and our only canonised member.