» Last Thursday Fr Oliver represented the community at the summer garden party held by The Tablet in London.
» Tomorrow Fr Hugh goes to London to attend the international Sacra Liturgia 2016 conference, being held this year in London, at Imperial College.
» Today Br Justin left for Downside Abbey to join other novices of the EBC for a novices' conference. While there he will give a presentation on Douai to the other novices. He returns on Saturday morning.
» Today two sisters of La Sainte Union, Sr Gisella and Sr Liesbeth, from Douai in France arrived to stay with us until Friday.
» Also today scaffolding is going up next to the block immediately to the right of the abbey church as seen from the gates. This block houses the sacristy and part of the guesthouse. The scaffolding is to allow for repairs to the roof. This building was originally intended to be the monastic chapter house, though it was never actually used as such.
» Lastly, today the altar candlesticks and incense boat that were sent off in April for replating returned in all their new glory. The candlesticks date from the 1930s, desgined by Thomas Derrick and cast by our own Fr Anthony Barron. Orignially they were on the abbot's altar in St Benedict's chapel (now the Blessed Sacrament chapel), the carved lettering on which is also by Thomas Derrick. Due to their rough casting the brass has surface flaws and is quite porous. Thus they have soaked up a great deal of the chemicals used in the replating process. This means that for a little while the candlesticks will bleed chemical residue, requiring daily polishing to remove. Once this bleeding has subsided the candlesticks will return to the principal altar in the abbey church. They are a unique part of historical patrimony.
Photographs of them today are included below. Those who have been generously donating to our Sacristy Fund will be able to see to what use donations will be put to. The sun this morning after Lauds hit the crucifixion station in the abbey church with particular effect. These stations were carved by one of our brethren, Fr Aloysius Bloor, to a design by Dame Werburgh Welch of Stanbrook Abbey. A photo of it is also included below. 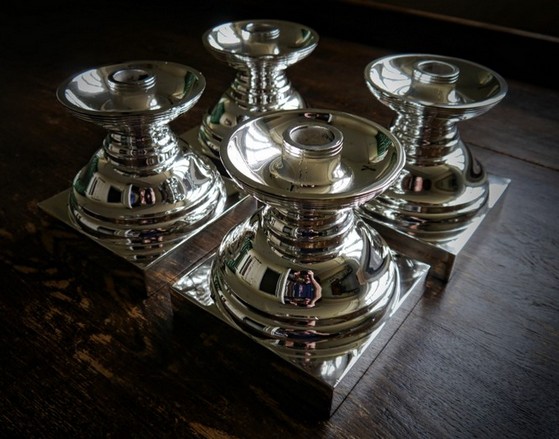 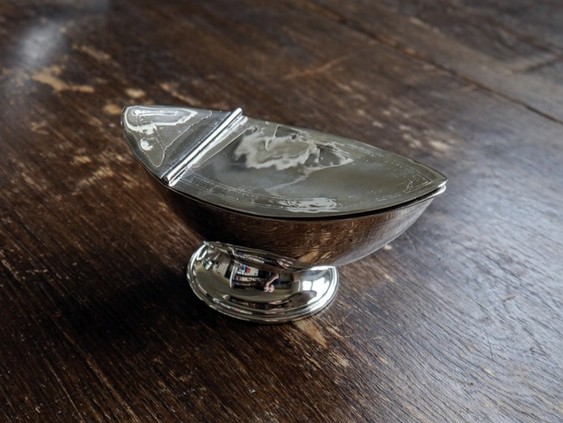